City and port of East Africa, it was the capital of French Somalia. The government was transferred there in 1895, before it was Obock State. A very active market, it formed an important stopover for ships bound for the Far East and represented Ethiopia’s largest outlet to the sea. In 1917 an important railway of 784 km was completed. which connected Djibouti to Addis Ababa.

Despite belonging to French Somalia, France never developed an active participation in the trade of the port of Djibouti. The history of Djibouti is closely linked to the French colonial period, from which it was released on June 27, 1977, when the French territory of the Afar and Issa became an Autonomous Republic.

Already in its first moments of life the young republic had to endure serious tensions because of the secular rivalry of the two ethnic groups. The two representatives of the groups: the Head of State Hassan Gouled Aptidon (Issa-Somala) and Prime Minister Ahmed Dini (Afar) were always at odds with each other over the structure to be given to the state. According to Abbreviationfinder, an acronym site which also features history of Djibouti, Dini argued that the government should be similar to that of Lebanon, with the assignment of the highest offices in proportion to the importance of ethnicity. The concept of state for Hassan Gouled was clearly unitary, a concept also supported by his “Popular League for Independence”.

When an attack occurred in the capital on 15 August 1977, with deaths and injuries, Hassan Gouled took the opportunity to apply a ferocious repression against Dini and his supporters. Then he also managed to bring many Afar to his side, entrusting the leadership of the executive to another important leader of the same ethnic group: Barkat Gurad Hamadou. And with this combination: Hassan Gouled, president of the republic, and Barkat Gurad Hamadou, prime minister, began the journey towards a one-party government.

In 1979, the “Rassemblement Populaire pour le Progres” was formed as a presidential party and in 1981 it was recognized as the only legal political party.

The opposition, led by Dini, formed the “Djiboutian People’s Party” but never managed to effectively oppose the government of Hassan Gouled who, in the elections of April 24, 1987, was reconfirmed as president.

But in the meantime the economy had lost much of its ancient prosperity due to the persistent instability on the Horn of Africa. There were several collapses in the volume of commercial traffic, through the imposing railway and even industry never reached high levels, relying only on modest manufacturing plants and despite the free port. Some projects to improve and complete the port facilities were started in 1984 with the construction of a terminal for “containers” and even modest successes in the energy and banking fields could be registered.

Because of all these difficulties Hassan Gouled had to apply austerity measures which resulted in an attempted coup in 1991 and in the north of the country an establishment of a guerrilla regime, carried out by the “Front for the Restoration of Unity and of Democracy “.

Unable to allow such a precarious act, the president was forced to promise democratization measures and in January 1992, in fact, appointed a committee for the drafting of a new constitution.

Internationally, the Djiboutian government remained in close contact with France, which still maintains a military garrison of thousands of soldiers, and remained politically equidistant from both Somalia and Ethiopia despite its initial pro-Somali tendency. And precisely because it was part of the Arab League, as early as 1977 Djibouti was able to act as a mediator in Somali-Ethiopian issues.

Djibouti entrusted international trade and financial intermediation with the country’s economic take-off so as to be able to definitively eradicate unemployment and existing political hardships.

In September 1992 a new Constitution was launched but this was not considered right by the opposition, which contested the undisputed high power that it attributed to the president. Despite everything, Gouled was confirmed in office even with the presidential elections of March 1993. But he had to face the guerrillas triggered in the north of the country by the “Front”.

The president then also found himself in difficulty with the position taken by the French government which proposed peace negotiations with the insurgents. And because the pressure from the French was strong, Gouled had to sign an agreement with the Front in December 1994. It was established:
– administrative decentralization;
– a more equitable distribution of power between the different ethnic groups;
– an integration of part of the military forces of the Front into the national army;
– entry of some members of the Front into the executive (what happened in June 1995). 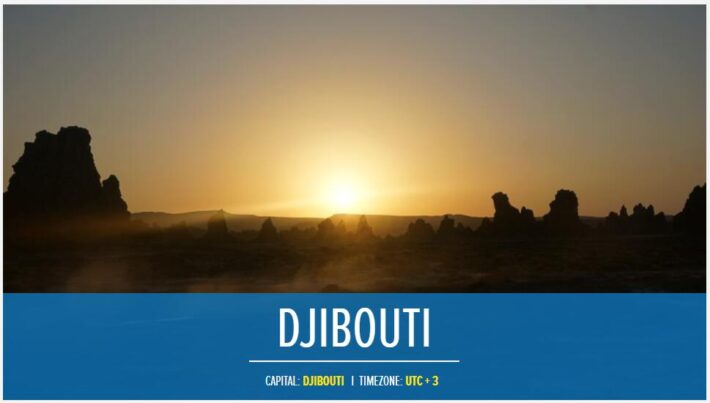 In fact, the Front itself turned into a political party in March 1996. Despite all the economic situation did not improve and popular demonstrations took place. The economy was made even more precarious by the return to home of over 10,000 refugees from Ethiopia and the presence in the country of 25,000 other refugees, almost all of them from Somalia.

In December 1997 the legislative elections decreed an overwhelming victory for the ruling party. The only two existing opposition parties did not even acquire a seat. The last presidential elections in April 1999 were the legacy of Ismael Omar Guelleh, a candidate supported by the outgoing president.