The first certain news relating to this part of the coast of East Africa concerns the Arabs who arrived there towards the end of the tenth century. They founded the cities of Patta, Malindi and Mombasa. A few years later the Arabs arrived the Persians who founded a colony in Kilva.

When the great Portuguese explorer Vasco de Gama arrived in April 1498, he touched Mombasa and wrote in his diary that he had found a “prosperous commercial port full of ships”.

In 1500 and 1505 two other Portuguese navigators arrived in Mombasa. The first, Pietro Alvarez Cabral, sacked it; the second Francisco d’Almeida occupied it and set up a naval base there.

In 1507 another Portuguese captain arrived, Tristan da Cunha, who enlarged the occupation of the city of Mombasa up to Lama and discovered three islands, which took his name from him, in the Atlantic west of the Cape of Good Hope.

In the years from 1586 to 1588 the Ottomans arrived, led by Ali Bey, who made many raids, so much so that the natives rose up, forcing Mzimba, the black chief of the internal territory and friend of the Portuguese, to completely destroy Mombasa. At the same time the Portuguese defeated the Ottomans.

After 1631 attacks and counter-attacks between Portuguese and Arabs occurred until in 1728 the Portuguese definitively abandoned the country leaving it prey to the sultans of Oman and Muscat who, in 1832, transferred their residence to Zanzibar.

And while the sultan Seid Said was in the Zanzibar headquarters, the Europeans arrived in the territory of present-day Kenya and immediately began exploring the interior. According to Abbreviationfinder, an acronym site which also features history of Kenya, Kilimanjaro and Mount Kenya were discovered respectively in 1848 by the missionary J. Rebmann and in 1849 by the missionary L. Krapf.

Ten years later other expeditions, that of JH Speke and JA Grant, discovered the sources of the Nile and the area of ​​Tanganyika, now Tanzania.

The Africanist Giuseppe Thomson in 1883 was the first to reach Lake Victoria and in 1888 the Hungarian count Teleki von Szek discovered Lake Rodolfo.

The following year there was a controversy between England and Germany over sovereignty over the territory and a special arbitration by the Baron of Lambremont assigned the region to England. Other arrangements took place, related to other territories, until in 1895 England assumed the direct government of all the regions managed by the East Africa Company. He then founded a protectorate over the entire coastal area and in the hinterland a colony to which in 1920 the name of Kenya was imposed.

On 15 July 1924 England ceded possession of Giubaland to Italy. In 1926 the region west of Lake Rodolfo was detached from Uganda and united with Kenya. From 1927 to 1929 England commissioned two special commissions to study the problems of the region in order to be able to apply the right remedies.

Then began a real work of colonization that achieved remarkable results in agriculture but not too many in cattle breeding. The production of coffee was of primary importance, to which was then added that of tea and sugar cane. Also important was the production of pyrethrum, used to a large extent for the composition of insecticides.
During and after the Second World War, as British colonial positions moved from Asia to Africa, Kenya was given primary tasks for collaboration with other territories of East Africa under British management, such as Uganda, the former Tanganyika and Zanzibar.

In March 1947 England proposed the establishment of a High Command of East Africa, composed of the governors of those territories, plus a legislative Central Assembly and an executive body. Despite the denial of the natives, the proposal was approved. But after the years immediately after the war, nationalist sentiments and longings for freedom began to meander in African colonies. Political parties were formed everywhere and Kenya African Union was founded in Kenya, to which was added immediately after the African Trade Union, plus a tribal association called Kikuyu Central Association.

The parties were different but the intent for all was unique: autonomy, independence. And with this program a very radical sect also arose, that of the Mau Mau. These in 1952 began their terrorist exploits, provoking harsh repression by England, but also a questioning by the colonizers about the reasons for this armed struggle. So England began to revise the laws, to expand reforms, especially in agriculture, but also constitutional ones, so that the natives could also be involved in the government of their country.

On 15 April 1958 a Constitution was launched, based on a legislative, executive and a Council of State composed of Europeans, Africans and Asians, in proportionate measure. The Africans, however, led by Tom Mboya opposed the “pluriracial” government formation, demanding a purely African state.

In February 1960, after the end of the Mau Mau’s violent actions, a Constitutional Conference started the process of self-government and then independence.

In 1961 the elections were won by the African majority of Kenya African National Union, led by J. Gichuru. In 1962 a coalition government was launched and the following year Kenya reached full self-government. The new prime minister was J. Kenyatta, a balanced and moderate man, an absolute guarantee for the Europeans present in the country. Independence was proclaimed on December 12, 1963 and December 12, 1964 the Republic.

Other stages were followed with reforms not always in favor of minorities and in 1967 the Trade Licensing Act established a program of complete Africanization of the working sectors, whereby the Asian minority was forced to move to England.
Various events of crisis and détente and gradual progress constituted the path of the young republic and came to August 22, 1978 when Kenyatta suddenly died.

He was succeeded by vice-president DA Moi, a member of a small ethnic group, that of the Kalenjin; he managed to build his own power base and in 1982 the Kenya African National Union became in all respects, even by law, the single party.
On 1 August 1982 there was a bloody coup, repressed but with many deaths, and in May 1983 a plot, said to have been led by Minister Njojo, who was also foiled. Other unrest, carried out by the students, caused the closure of the University of Nairobi.

In 1988 there was a serious crisis with the assassination of Foreign Minister R. Ouko. In December 1991, multipartism was applied and in December 1992 Moi and his party still achieved resounding success.

During all the time of his government, Moi always managed to conduct excellent relations with the western states, but also in African territory he was able to carry out his good mediatory actions, especially to favor the long guerrilla war in Uganda.

Despite the fact that at the beginning of the nineties Kenya also came to multi-partyism, nevertheless it never reached a substantial democratization of the country, which therefore continued to be governed by the system of ethnic preferences and patronage.

The first presidential and legislative multi-party elections of 1992 were sponsored under the control of the Commonwealth which declared them correct. Due to some unrest that broke out between various different ethnic groups, they did not fail to assign victory to the ruling party. There was also a suspicion that the pre-election conflicts had been created in the face of government elements to demonstrate that with a similar degree of immaturity of the voters, multi-partyism was not the right solution, at least not yet.

In the following years the situation did not improve; bloody clashes continued, especially between the Kikuyu and Kalenjin ethnic groups, which caused the exodus of thousands of people to other areas. 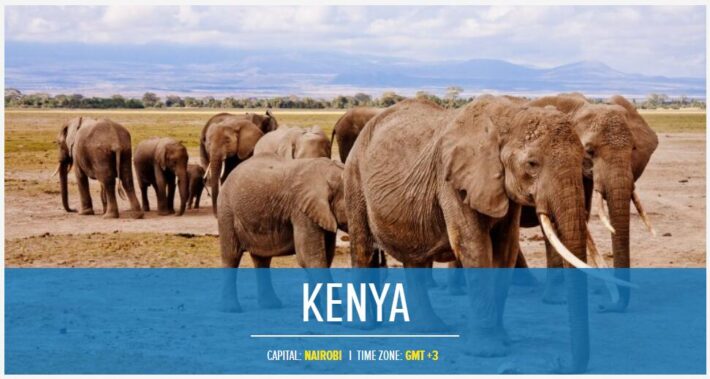 In the cities there had to be a sharp increase in crime; popular protests increased, repressed harshly, enough to cause complaints and convictions by various international organizations for the protection of human rights.

In March 1996 both Britain and Germany decided to help Kenya by making substantial loans. Various negative events characterized the whole of 1997, which passed between violence and demonstrations of all kinds, as well as continuous requests from the government for constitutional reforms. In December, ballot boxes were held and Moi was confirmed as president and the Kenya African National Union remained a governing party. Violent ethnic clashes were the protagonists both in 1998 and 1999. In the international field, relations with Tanzania and Uganda with which a permanent commission had been created in 1994 to give more space to economic and social cooperation had improved.