The first Italian expeditions towards the fifteenth century were based on writings handed down by Greek and Arab geographers of antiquity. In the following century the action of the Portuguese explorers was added, including Dom Christovam De Gama, son of the great Vasco, who landed in Massaua, spent the rainy season there and then continued on to Abyssinia.

Much historical and geographical material could be collected thanks to the Portuguese Jesuit fathers, first of all Father Emanuele Barradas, who explored and described the whole area of ​​the Tigrè very well.

Among the travelers who traveled to Eritrea in the 19th century to reach Ethiopia, we find Th. V. Heuglin who was part of an expedition which also included the Swiss W. Munzinger, the astronomer T. Kinzelbach and the biologist Steudner.

From 1861 to 1862 he traveled the whole region between Massaua and Cheren and Sudan and we have received a very minute and precious report of this itinerary, accompanied by explanatory maps.

According to Abbreviationfinder, an acronym site which also features history of Eritrea, Munzinger, who later became governor of Massaua, also handed down valuable documents relating to the Eritrean plateaus. And, before the Italian occupation, Father Giuseppe Sapeto, who resided in the Cheren mission for several years, wrote “Journey and Catholic mission between the Mensa, the Bogos and the Hababs”, of 1857, with which he handed down detailed notes on the place and on populations.

It is known for certain that Eritrea was part of the Kingdom of Aksum and practiced flourishing businesses on the coasts. But when the expansion by sea was interrupted due to the rise of Islam, the Aksumites were forced to go inland, on the highlands, and for about six centuries they remained far from the center of Aksum, while the Muslims established themselves on the Eritrean coast.

Later the Portuguese arrived who defeated and expelled the Muslims and made a pact with the Negus of Ethiopia, which lasted until 1632, when the Portuguese Jesuits were expelled from the Ethiopian territory.

Weakened by these wars both the Muslims and the Ethiopians, Eritrea fell at the mercy of the Galla, a Camitic race people, who distributed themselves in East Africa. They, after making great devastations in the area, left the country in the hands of local Muslim lords on the coasts and Christian feudal lords inside.

After three centuries another expedition arrived, the English one, commanded by Sir Robert Napier; this however continued its journey towards Ethiopia and Eritrea became a battleground between Egyptian Muslims and Abyssinian Christians (1875/76).
Eritrea then fell into the hands of the Dervishes, Islamic monks and warriors, who expelled the Egyptians and then were in turn expelled by the Italians in 1885.

Italy, after various rough political events with Ethiopia, occupied Asmara and Cheren and, with the last campaign against Mangascià, head of the Tigrè, led by General Baratieri, Eritrea became an Italian colony.

The first governor, Ferdinando Martini, immediately began a wise and peaceful development work. Divided the territory into Regional Commissariats; instituted a judicial system that always kept indigenous rights in mind, pending the compilation of special codes for Eritrea which, to be honest, never saw the light of day.

After some Anglo-Italian-Ethiopian agreements, the borders of Eritrea were established in Danakil, a land of Arab origin (1908).
Italy always maintained good relations with the nearby English and French colonies. In 1907 Salvago Raggi succeeded Martini who continued the work of his predecessor and built the Massaua-Asmara railway. Colonization did not stop even during the First World War; the works brought the railway up to Cheren and, under the subsequent government of Gasparini, the works began to bring the railway up to Agordat. And with this the various businesses started, through the outlet on the Red Sea, which gave Eritrea another face and a new value.

In the five years preceding the Second World War, Eritrea had a remarkable development. Traffic in the port of Massaua went on increasing and trade with the nearby Arabian peninsula was also greater.

The Italians residing in Eritrea in 1939 reached a fair number of 78,000 and were mainly dedicated to trade and transport industries. But they did not neglect agriculture at all which, indeed, made a significant leap forward after the agricultural-industrial enterprise, due to the governor Iacopo Gasparini, who increased the production of cotton through the possible irrigation through the built dam on the river Gasc.

Even the industries: hotel, transport, mechanical, food, agricultural, salt, fisheries and mines, had a great development.

And in the midst of this fruitful work of the Italians, the Second World War came which, the following year, saw the occupation of the territory by the British. When the occupation of Asmara, Massaua and Assab was completed between March and June 1941, the Italian administration ended and the English one began.

Throughout the period of the war, the vitality of Eritrea continued to express itself, and even in the following years, 1943/44, the remaining Italians continued to plant industries, such as shoe factories, match factories, leather processing and food industries. Then, in August 1946, bloody incidents occurred on the border with Sudan, which aroused some concern in the country; but the peaceful aspirations of the Eritrean people, combined with the sincere feeling of friendship of the Italian-Eritreans, contributed to keeping alive the cooperation pact between the two peoples.

On February 10, 1947 Italy had to decline its sovereignty over Eritrea but asked for the trusteeship. To solve the question, two commissions were set up to collect citizens’ opinions and aspirations in the country. Having had no clear response, the United Nations intervened and took care of everything. Still unsuccessful. Until in 1950 Italy and England, by mutual agreement, presented a project of the Eritrea-Ethiopia Federation, which was approved and, in September 1952 the Constitution was ratified and in the following December the emperor of Ethiopia officially visited Eritrea.

With the cessation of many Italian businesses, there was a sharp rise in unemployment. Furthermore, as customs tariffs on goods from Ethiopia have increased, and therefore lead to an increase in the price of the same goods, the standard of living of the former Italian colony dropped significantly. Therefore Eritrea was forced to ask for foreign aid, representatives of technicians and external administrators, and all this gradually reduced the autonomy of the country.

Furthermore, all political and cultural structures were equated with Ethiopian ones, so that in the schools the study of the Amharic language became compulsory, but not of the Tigrinya language; opposition political parties were made to disappear and all manifestations of criticism, both political and social, were silenced. From May 1960 the entry “Eritrean government” was replaced by that of “Eritrean administration”.

The few Italian residents left in Eritrea continued to carry out their activities, especially in the field of public administration and the Italian state had to sell all its properties, by way of compensation for war damages, keeping only the ownership of schools, hospitals, churches and the premises of the Italian diplomatic mission.

The Federation went on for a decade and in all that time Eritrean institutions disappeared until in 1962 Ethiopia proclaimed the annexation of the territory. No foreign state opposed this event, each thinking about their economic and commercial interests. Who created a clear opposition to this state of affairs were the Eritrean politicians in exile, who for some years abroad had been laying the foundations for obtaining the independence of their homeland.

The “Eritrean Liberation Front” had been founded in Cairo since 1958, which went into active armed struggle in the 1960s and 1970s, also overcoming many conflicts between the various ethnic groups within the Front itself.

But around 1981/82 a split led to the foundation of a new movement, which was called the “Popular Liberation Front of Eritrea”, with a progressive-socialist-Marxist orientation.
This Front continued the struggle and in 1988 took over the Ethiopian forces.

This was a real war and also made use of military aid of Soviet and Cuban origin. At the end of the war, especially the representatives of those two powers, they worked to peacefully resolve any conflict.

In Eritrea the period of reorganization of all its structures began; the Tigrinya language was restored at all national school levels; government policy maintained socialist-Marxist ideology.

Peace negotiations began in 1989 but were unable to continue because in 1990 Front forces occupied Massaua and in 1991 Asmara and Assab.

Then the Front took over the entire control of Eritrea by creating a provisional government chaired by the secretary of the Front itself, I. Afewerki, who called a referendum for the people to choose the government to give themselves and there were three indications: independence, federation or union with Ethiopia, with which meanwhile good relations were restored.

The referendum was scheduled for 1993 and in the meantime the provisional government of Afewerki was recognized as legal by the London International Conference held in August 1991.

He launched measures to support industries, agriculture and fishing, with the search also for foreign investments, which were naturally hostile to the government’s Marxist direction.

The referendum, held in April 1993, registered the very high turnout of 99.8% of the population who chose independence. In May 1993 Eritrea was admitted to the United Nations.

Then the transition period of power to multiparty with a new Constitution was established in 4 years, so as not to immediately create ethnic and religious disagreements.

Meanwhile, a Council of State, led by Afewerki, had executive power and a National Assembly had legislative power.

One of the first deliberations of this Assembly was the appointment of Afewerki as President of the Republic. In February 1994 the Front changed strategy and from an armed movement it became a political party with the name of “Popular Front for Democracy and Justice”. This adopted a more moderate policy and started a substantial democratization process.

Appropriate measures were launched to attract foreign capital, much needed because, to the already disastrous economic situation, the damage caused by a prolonged drought that had hit the region in 1993/94 was added.

Meanwhile, a new constitution had been drawn up by a special commission. There were two conferences in June 1994 and January 1995 in which international law experts scrutinized the various articles to approve it or not. Then there were various assemblies in the country in which the population and the army also debated. Finally in May 1997 there was the launch of the new Constitution. 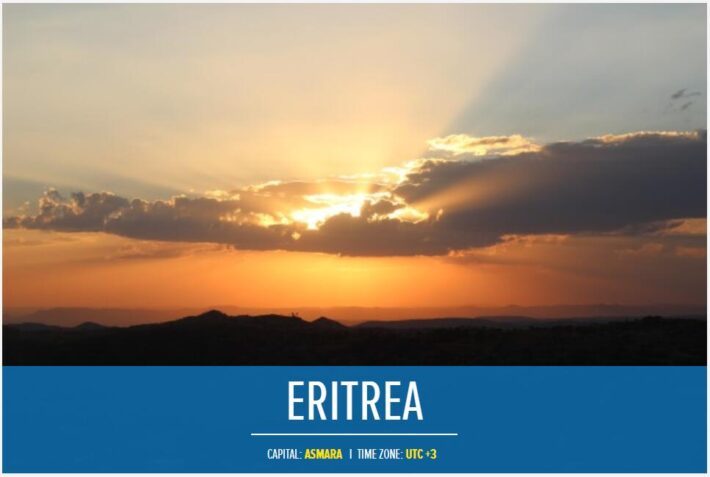 Relations with Ethiopia remained good while relations with Sudan worsened, accused by Afewerki of connivance with unfavorable Islamic groups. This conflict with Sudan had as a logical consequence an approach to the United States and to Israel who considered Khartoum to be the main reference of Islamic fundamentalism. In 1995 relations with Yemen were particularly difficult due to a question of sovereignty on the Hanish islands in the Red Sea.

At the beginning of 1998 a strong upsurge in nationalisms on both sides led Eritrea and Ethiopia to an armed conflict. But certainly that of nationalism was not the only reason. The seed of discord was represented by a strip of land along the border with Sudan that led to economic conflicts, fueled, especially after Eritrean’s 1997 decision to coin its own currency, from Ethiopia’s concerns about not to be able to use the Eritrean ports.

Peace mediations between the two countries operated by both the United States and the Organization of African Unity were of little use.