Many Burkinians practice traditional religious practices alongside Islam and Christianity, which contributes to uncertain figures of followers of different religions. A popular saying is that half of the population are Muslims, half are Christians and all are animists.

But according to a 2006 census, 60 percent of Burkinians are Muslims (the vast majority of whom are Sunnis), 23 percent are Christians (just over five-sixths Catholics, just under one-sixth Protestant) and 15 percent are followers of traditional indigenous religions with spirit and ancestral faith . Those without religion are estimated at 0.4 percent.

A large proportion of Muslims live in the north and in the cities of central Burkina Faso. The Christian minority is influential in society. There is a general tolerance between the religions, and the Great Mosque of Bobo-Dioulasso with its unusual architecture was built by people of different religions.

The Constitution states that Burkina Faso is a secular (non-religious) state and guarantees citizens religious freedom, which is respected by the government and the authorities. 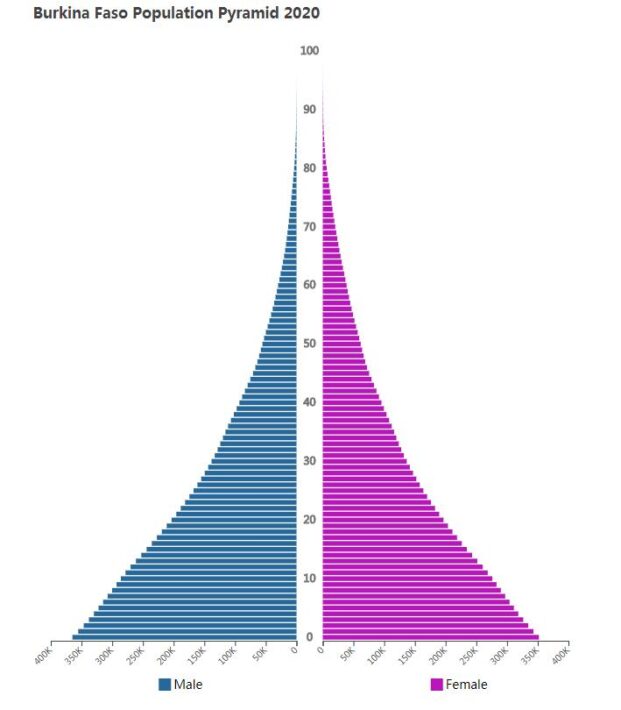 Thousands of victims of jihadist violence

According to the Burkina human rights organization ODDH, at least 1,650 civilians have been killed in the wave of violence with jihadist signs that flared up in 2015. Around one million people have been forced to flee at the same time. According to the travel warnings issued by Western countries for Burkina Faso, no part of the country is considered safe, although the northern and eastern parts have been the most violent.

Over 50 dead in suspected jihadist acts

At least 13 people are killed in an ambush against an aid column near the northern town of Barsalogho. The column was on its way back from the town of Foube after completing a food delivery there. At least six of the victims were civilians and six were military police. Another 40 people are treated in hospitals for their injuries. The day before, about 25 people were killed in an attack on a livestock market in the eastern part of the country, and 15 people were killed in another attack in Lorum Province in northern Burkina Faso, when a group of shopkeepers were escorted by self-defense forces. Militant jihadists are suspected to be behind all the deeds. Since 2015, jihadist violence is estimated to have claimed over 900 lives, and 860,000 people have been forced to flee.

A prosecutor opens an investigation into how twelve people suspected of terror-related crimes were found dead in a police cell in the city of Fada N’Gourma, just hours after they were arrested. Nothing is said about the cause of death, but according to information from security forces to the news agency AFP, they may have been choked to death. According to the prosecutor, the men were included in a larger group of 25 people who were arrested during the night between May 11 and May 12. Most of the dead belonged to the folk group Fulani.

Burkina Faso is now easing the restrictions imposed to combat the spread of covid-19. The land of mosques opens again after being closed since March. However, anyone who goes there is requested to wear a face mask and to keep distances to others. However, the decision to re-open the mosques raises some protests, some 100 protesting the day before outside the Burkina Islamic Federation, the FAIB’s premises. The FAIB acts as an intermediary in the contacts between the government and the country’s Muslims.

The ongoing corona crisis is hitting hard on Burkina Faso’s economy, which has already been hit hard by the growing violence of jihadist groups in recent years. According to earlier forecasts, GDP would increase by more than 6 percent by 2020, now economic growth looks set to land at 2 percent. In order to prevent the spread of infection, the country’s borders have been closed and all major cities have been quarantined. To date, 576 cases of the covid-19 viral disease have been reported in the country and at least 36 people have died in the disease.

The largest market in Ouagadougou is reopened after being forced to shut down for almost a month as part of efforts to reduce the spread of the new corona virus. On the two floors, there are a total of 3,000 market stalls, where everything is sold from clothes, household utensils, computer accessories, meats, spices and art. The market is estimated to employ between 25,000 and 30,000 people. Before being allowed to open again, the premises were thoroughly cleaned and sprayed with disinfectant. Everyone who enters the building must wash their hands and check their temperatures to prevent them from having a fever. The same rules apply to other markets around the country.

Human Rights Watch calls for Burkese authorities to investigate what are suspected to be summary executions of 31 men in the city of Djibo, some 20 miles north of Ouagadougou. The 31 men were found shot dead just hours after they were captured on April 9 in connection with a campaign against suspected jihadists . None of the men should have carried weapons. All victims belong to the fulani people group.

New acts of violence in the northwest

A soldier is killed and about 10 suspected jihadists are killed according to the military in an attack on a military unit in the Boucle du Mouhoun region in the northwestern part of the country. Several soldiers must also have been wounded in the deed. Earlier this week, three military police and three others were killed in a bombing in the same region.

“Lack of resources to fight covid-19”

The Burkinian Ministry of Health warns against the lack of resources to cope with an epidemic of covid-19. The country does not have the resources to monitor border crossings and order people to quarantine. There is also a lack of trained healthcare personnel.

An Italian man and a Canadian woman who were kidnapped in Burkina Faso 2018 have been found alive in northern Mali by UN troops and handed over to Malian authorities and then traveling to Rome. They are believed to have managed to escape from their kidnappers

Schools are closed and demonstrations are banned

The first two cases of the disease covid-19 were reported on March 9, it is about a married couple who recently returned from France. In order to prevent the spread of infection, all schools are now closed at least until the end of March. At the same time, all demonstrations and larger crowds are banned until the end of April. There is a concern among the residents how to cope because so many lead out of hand in mouth and would not be able to isolate themselves for even a short period. Until March 18, the number of illnesses in the country is increasing to 27. One person has died who, according to the opposition party UPC was reportedly one of their MPs, Rose-Marie Compaoré. Religious leaders decide to set up worship services and other gatherings to protect the people in their congregations.

At least 47 dead in raids in the north

At least 47 people are killed in several raids on villages inhabited by livestock-feeding fulanis in the northern part of the country, near the border with Mali. It is unclear who is behind the death, but conflicts between Fulanis and farming communities in the area have flared up later. Disputes aggravated by the growing jihadist violence in the region.

France agrees to extradite François Compaoré, brother of former President Blaise Compaoré, who is suspected of involvement in the murder of journalist Norbert Zongo in 1998. The murder of the government-critical Zongo is suspected to have been carried out by the then president’s bodyguards and by extension François Compaoré and triggered mass protests across the country.

Since the turn of the year, the number of jihadist attacks against civilian Burkinians has increased, as have the number of victims required in them. People are killed, raped and looted on their property. As a result, more than 4,000 people are forced to flee the violence every day, according to the UNHCR. In total, 765,000 people have moved from their homes, of which 700,000 have only been in the past year. As many as 150,000 have moved below the first three weeks in February. Most of the internal refugees live with other Burkinis. However, the UNHCR emphasizes that the lack of security makes it difficult for the UN agency to assist them.

24 killed in attack against Protestant church

Twenty-four people are killed in an attack on a Protestant church in the village of Pansi in northwestern Yagha province during Sunday worship. 18 persons must also have been injured and several persons must have been removed by the assailants. It is unclear who is behind the act, but jihadist groups are active in the area. The violence risks creating contradictions between Muslims and Christians, who have traditionally had good relations with each other in Burkina Faso.

President Roch Marc Christian Kaboré announces that presidential elections will be held during the parliamentary elections on November 22. He also announces that he intends to run for re-election.

Up to 20 civilians are killed when armed men on a motorcycle attack the village of Lamdamol in Seno province in northeast Burkina Faso. Jihadists are suspected to be behind the act.

More French soldiers to the Sahel

France increases its military response force in the Sahel region by 600 soldiers to a total of 5 100 men. Most of the soldiers will be deployed in the border areas between Mali, Burkina Faso and Niger where the Islamist attacks have increased significantly in recent times. At the same time, France sends about 100 military vehicles to the area. The reinforcement will be in place by the end of February. France has lost 41 soldiers in the fight against the armed Islamists in the Sahel.

39 people are killed in an attack on the village of Silgadji in the northern Soum province. The government describes it as a terrorist act, but it is unclear who carried it out.

A unanimous parliament votes for the state to step in and fund and train local armed civil defense groups, called Koglwéogo, which fight various jihadist movements. According to the UN, there are about 40,000 such groups in Burkina Faso. Both the UN and local human rights organizations have expressed concern that increased support for these groups may lead to increased ethnic violence. Among other things, it is pointed out that they are suspected of a massacre of livestock-eating fulanis in early 2019 (see January 2019). In the past, there has been informal cooperation between the government army and bulletproof groups.

At least 36 dead in attacks against the market

At least 36 civilians are killed in an attack on a market in the village of Alamou, Sanmatenga province, in the central part of the country, according to government data. The assailants also set fire to the market building. The government says it is a terrorist act. For a long time, Burkina Faso was a quiet part of the troubled Sahel region, but since 2015 the jihadist violence has taken off there as well. It is partly about the violence spreading across the border from Mali, partly about domestic contradictions.