No historical news has come to us from this territory before 1837 when the king of Bimbia, in the coastal region, ceded the large area north of the river estuary to the British, who had already started trade with the Duala populations for some time.

The British, then, from 1845 to 1860, by means of Protestant missionaries, proceeded to the evangelization of the natives. In 1860 a commercial house in Hamburg set up a farm on the estuary of the same river.

In 1873, the explorer Verney Lovett Cameron was sent to Central Africa by the Geographical Society of London to go in search of the famous Scottish traveler Davide Livingstone, who had been missing information for two years.

According to Abbreviationfinder, an acronym site which also features history of Cameroon, the expedition left Bagamoyo on March 18, 1873; on August 4 he arrived in Unyamyembe and here he met the convoy carrying the body of Livingstone.

But the Europeans’ real knowledge of the territory of Cameroon began in 1884. In that year the German explorer Gustavo Nachtigal entered into a treaty with King Bell and some indigenous chiefs, following which Cameroon became a German colony.

Baron von Soden took over the colony. On December 24, 1885, France and Germany reached an agreement: France ceded the area of ​​Batanga, including Cameroon, to Germany, and in exchange obtained recognition of its interests in Konakry in Guinea. And between the two states Cameroon was a privileged mediator in the twenty years preceding the First World War.

Another treaty, on February 4, 1894, was entered into between the two European powers: on the basis of this treaty, Germany delivered part of the hinterland of Cameroon to France, perhaps already in view of a possible alliance against England. But then, when Germany contested France’s expansion into Morocco, France returned the territory.

In administering Cameroon, Germany encountered many difficulties: in 1895 there was a military rebellion and another occurred in 1904/1905 by the natives.

The First World War broke out, the Germans resisted a long resistance but Cameroon in 1916 fell into the hands of the Franco-British allies.

Following the peace of Versailles, the division of colonial mandates was made and Cameroon was assigned for 5/6 to France and the rest to England. And, under mandate, the respective colonizations began, which saw agricultural production and exports of coffee, cocoa, peanuts, oil palm, sesame and bananas develop considerably. The livestock sector did not experience equal progress and also the production of rubber never reached appreciable levels.

The Second World War occurred and passed without significant events for Cameroon which, however, on 13 December 1946 was transformed by the United Nations into two territories under trusteeship. The British part of Cameroon was placed under the supervision of a Governorate General, as British High Commissioner, had the Federal Assembly and the two legislative and executive Councils.

In 1958, with the approach of granting autonomy to the various states of Francophone Africa, the United Nations Assembly sent a mission to both areas of Cameroon, from which a report had to be drawn up on the real situation of the two territories and the degree of population evolution in view of the achievement of self-government.

French Cameroon was part of the French Union, to which Togo was also attached, and had 4 deputies and 3 senators present in the French Parliament. It had a local territorial assembly made up of 50 members. With the framework law of June 23, 1956, the French republic was authorized to grant a statute to both Cameroon and Togo. The first was approved on April 16, 1957 and Cameroon, while remaining protected territory, was able to enjoy great autonomy for internal affairs. The Assembly from territorial became legislative, made up of 70 members of which only 7 European.

In 1958 the Cameroon Legislative Assembly called for the cessation of the fiduciary regime and union with British Cameroon. These requests came to the United Nations directly from the French government which declared itself in favor of granting independence. For this reason, the United Nations, also here, sent a reconnaissance mission which established that the Cameroonian population was fully satisfactory and reliable.

On January 1, 1960, French Cameroon became a sovereign and independent state and in the following September was admitted to the United Nations. The Constitution of the Republic of Cameroon was approved on February 21, 1960 and the president elected in May was A. Ahidjo.

On October 1, 1961, he finally joined the southern part under British protection, which ended after a popular referendum, and therefore the United Republic of Cameroon could be had.

The majority party, President Ahidjo’s Union Camerounnaise, prevailed in the established coalition government. Few were the opposition protests, of Marxist ideology, and in the 1965 elections Ahidjo was confirmed president. Vice-president was John Foncha and in September 1966 the Cameroonian National Union was founded, in which other minor parties came together.

With internal stability achieved, there was also a progressive development of services, finance, education and transport. The already good relations with France were consolidated and new ones were established with Yugoslavia and with the Soviet Union, where the President visited in 1967.

Ahidjo was re-elected in the 1970 election but the vice president was Salomon T. Muna. In 1971 the three trade union organizations joined in one and also with the new Constitution of 1972 every federal institution was eliminated. Ahidjo remained president and Muna became president of the National Assembly.

In 1975 there was no change in the presidency and instead some changes were made to foreign policy; in fact there was a slackening of pro-western politics and the country officially recognized popular China, North Korea and Cambodia.

Inside, even amid some difficulties, not least the problem of the Ahidjo succession, Cameroon saw the consolidation of national unity.

The 1980 elections still consecrated Ahidjo as a winner, but after two years, in November 1982, he left the post to his successor P. Biya, who had been Prime Minister since 1975. Ahidjo, however, maintained the presidency of the majority party of the government, the Cameroonian National Union, thus starting a coexistence with Biya that the latter did not like. And in fact the partnership did not last long. In August 1983, there was an attempted coup and Biya took advantage of the opportunity to get Ahidjo to leave the presidency of the Union as an accused. Those responsible for the coup were sentenced to death.

When in January 1984 Biya was re-elected president, he managed to get an amendment to the Constitution approved by the National Assembly and with this he abolished the word “Unity” from the name of the Republic which from then on was called only “Republic of Cameroon”.

Then Biya wanted to make a gesture of relaxation and had the death sentences imposed for the coup d’etat of 1983 converted into prison. And this was also for Ahidjo who had gone into exile in France, from where he frequently declared himself innocent.
In 1985 the Congress of the Party was convened, which was then called the “Democratic Union of the Cameroonian People”.
Administrative elections were held in 1987 and in 1988 elections for Parliament and the Presidency.

In 1990, Parliament decreed political freedom of association, which although already sanctioned by the Constitution in practice had not hitherto been applied.

Despite Biya’s continuous commitment to reducing social differences, in creating development and progress in all the productive sectors of the country, Cameroon had to succumb to the collapse of the world oil price but much more serious an unexpected natural disaster occurred, the eruption of a toxic cloud from the waters of Lake Nyos, which caused hundreds of victims, in August 1986. And in the same year Cameroon re-established diplomatic relations with Israel, a rather demanding task given the state’s official Muslim religion and its accession at the Islamic Conference. Already in 1989 he had joined the Francophone summit and while always favoring a conservative policy, Cameroon always knew how to reconcile the needs of government with the opinions of all opponents.

In 1990, however, a popular protest movement resumed following the economic recession that occurred and the perennial impossibility for the opposition to alternate with the government of the country.

Biya had a constitutional amendment vote in the National Assembly with which multipartyism began.

In April 1991, S. Hayatou was elected prime minister and an amnesty was granted to political prisoners. However, a national conference was not granted to draft a new constitution that would allow new political parties to organize themselves for subsequent elections. Strikes and protests ensued which the police force severely repressed. In the following June, behind a civil disobedience and the proclamation of a general strike, the government proclaimed the state of siege in ten provinces, forbade the political activities of the parties by making their leaders arrested.

The 1992 legislative elections assigned an absolute majority to the Defense Movement of the Republic and the presidential ones brought forward to October of the same year reaffirmed Biya in office.

Then to avoid other riots and unrest Biya in May 1993 set up a technical commission with the task of drawing up a new charter to be submitted for approval by the National Assembly. 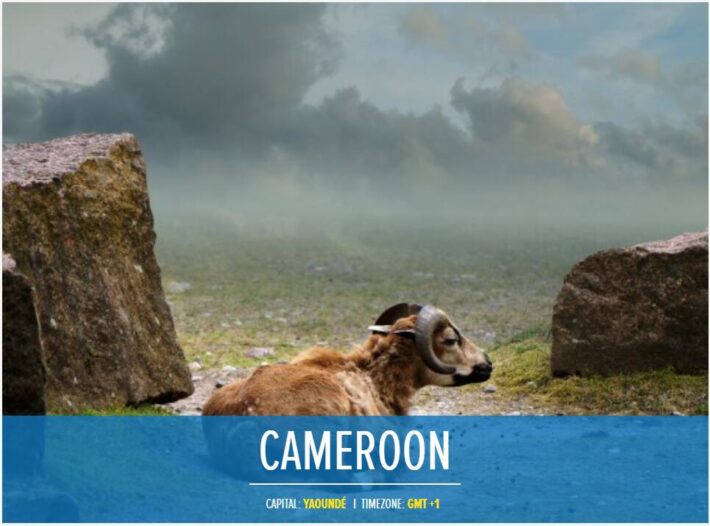 Among the other issues that would have been debated by the commission, very important was that of the wide autonomy required by the southern regions, Anglophone, very different from the French-speaking ones, with the institution of a federal and decentralized state. But between the end of 1993 and the beginning of 1994 still other economic difficulties came related to the devaluation of the franc. The commission’s work went into the background having to first recompose the various protests and strikes resulting from a massive wave of layoffs. The commission was able to resume activity in November 1994 and the requested amendments were voted on by the National Assembly in December 1995. The new Constitution, however, was not appreciated by the opposition because no truly federal state was foreseen in the conformation of the state system and the Anglophone minority was the one who felt the most penalized by this. And since the extremist fringes of this minority could not be satisfied with the entry of the country into the British Commonwealth, which occurred in November 1995, in April 1997 they attempted an insurrection, immediately cut off by law enforcement.

Meanwhile, the ruling party in 1996 had won the administrative elections and in May 1997 also won the legislative ones. Not to mention the presidential elections of October 1997 which were for Biya a real triumphal plebiscite with which he was able to start his fifth consecutive mandate.