Christianity is state religion in Zambia, but religious freedom is enshrined in the constitution and is also respected in practice. Christianity is largely mixed with traditional African beliefs.

The practice of religion clearly reflects the interplay between Western influence and traditional African culture. Few Christians have completely renounced the ancient gods and belief in the power of the ancestors, and followers of traditional religions are rarely completely unaffected by Christianity.

The traditional religions have several common features. The followers usually believe in a supreme god, a creator. The family includes both living and dead relatives. The ancestors represent the supernatural and require as much respect as living older relatives. The magical powers of the ancestors are summoned, among other things, to get help from enemies. Trials and accidents are often regarded as the result of black magic caused by some hostile mind. With the help of ancestors and other forces, evil is fought.

Nine out of ten Zambians are Christians. In 2010, just over two-thirds of them belonged to various Protestant communities, while Catholics made up about one-fifth, according to the American Research Institute Pew Research Center. Those belonging to the country’s small Asian minority are usually Muslims or Hindus. 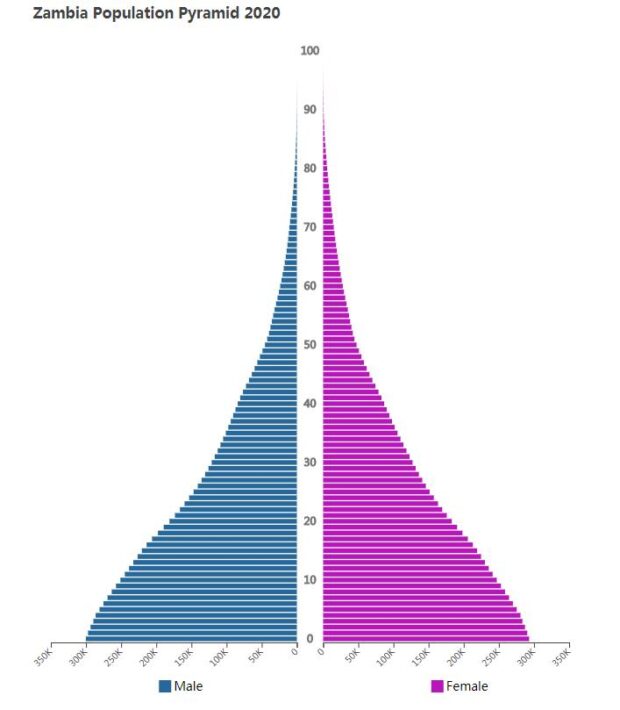 There are over 90 ethnic groups in Zambia. Most are Bantu tribes. Around 40,000 Europeans and 10,000 Indians live in the country as well as refugees from Angola. The urbanization has progressed. 45% of the population already live in cities. The capital Lusaka has 980000 residents (1999). In the rest of the country, the population density is 12 people per square kilometer and is therefore very low. Child and infant mortality is extremely high.

The official language of Zambia is English. In addition, mainly Bantu languages ​​are spoken. Almost three quarters of the population professes Christianity. Traditional tribal religions continue to be cultivated.

The murders of three Chinese factory managers in a suburb of the capital, Lusaka, have once again shed light on the tensions created by the large Chinese presence in the country. China is the largest foreign investor in the country and Chinese business has for many years been criticized for poor working conditions, discrimination and “neo-colonialism”. The three Chinese managers were found in their burned-out factory and, according to local press, were murdered by dissatisfied employees. Two suspects have been arrested. Lusaka’s mayor has been running a campaign against Chinese presence that has received a lot of attention. He now apologizes and says he has failed in judgment.

In connection with the celebration of Africa Freedom Day, President Edgar Lungu decides to pardon nearly 3,000 prisoners. Among them are two men who last year were sentenced to 15 years in prison for having sex with each other (see November 28, 2019). The two men were arrested in 2017 in a hotel in the city of Kapiri Mposhi. Same-sex relationships are prohibited in Zambia.

Revenue for the Treasury is dwindling and President Edgar Lungu decides to ease the restrictions introduced March 20 due to the covid-19 viral disease. Continued closure would mean an economic crisis, the president says. Cinemas, restaurants and gyms are now allowed to reopen, while bars still have to keep closed. The number of infected people in the country is still low and, according to official figures, so far four people have died as a result of covid-19.

The day after the first case of covid-19 virus disease is discovered in the country, the country’s schools close. General meetings of more than 100 people are prohibited and those who have traveled to “high-risk countries” should be quarantined for 14 days. Restrictions have been introduced for cross-border passenger transport, including passengers arriving from neighboring countries to be tested for fever and early viral symptoms.

Teenager is being prosecuted for slander

A 15-year-old boy from the town of Kapiri Mposhi is being prosecuted for defamation by President Edgar Lungu. He faces up to five years in prison. The prosecution is based on posts he made on Facebook under the fictitious name Zoom. In one of the posts, the 15-year-old wrote: “our country would be better off without Edgar Lungu”. In recent years, the climate against the president’s critics has hardened and Lungu’s opponents are warning that society is becoming increasingly authoritarian.

Gang crime is suspected to be behind gas attacks that cause concern and fear in Zambia. According to witnesses, a sleeping gas is injected into a private home. The perpetrators then enter the houses and rob their victims. In the anger that no one has been arrested for the assaults, residents of the vulnerable have formed the Citizens’ Guard and relied on people they believe are involved. The military is now deployed to deal with the crime wave. The gas attacks began in the mineral-rich area of ​​the Copperbelt in December and then spread to the country’s capital Lusaka. According to the chief of police, close to 2,000 people have been affected. The crimes are surrounded by rumors and political parties accuse each other of being involved.