In Chad there is no state religion. Religious freedom also prevails if the government monitors and tries to curb the activities of certain violent Islamist groups.

Religious organizations must be registered by the state. Religious instruction is prohibited in state schools but allowed in private schools. It is not allowed to preach on streets and squares.

Islam reached the area where the present Chad is located during the 12th century and slowly spread south. Today, about half of Chadians are Muslims. They live mainly in the northern and eastern parts of the country, but in recent years, migrations have meant that Islam has taken root even in the south where Christianity and African religions otherwise dominate.

About a third of Chadians are Christians, most of whom are Catholics.

About seven percent are estimated to practice traditional religions. Even some Muslims and Christians have retained the element of popular belief in their religious practice. In Chad there are also followers of Bahai, a religion that wants to bridge all conflicts between peoples, religions and social systems.

The government is largely made up of Muslims and has been accused of favoring their cousins. Contradictions between Muslims and Christians have at times been a feature of civil war and political power struggles. 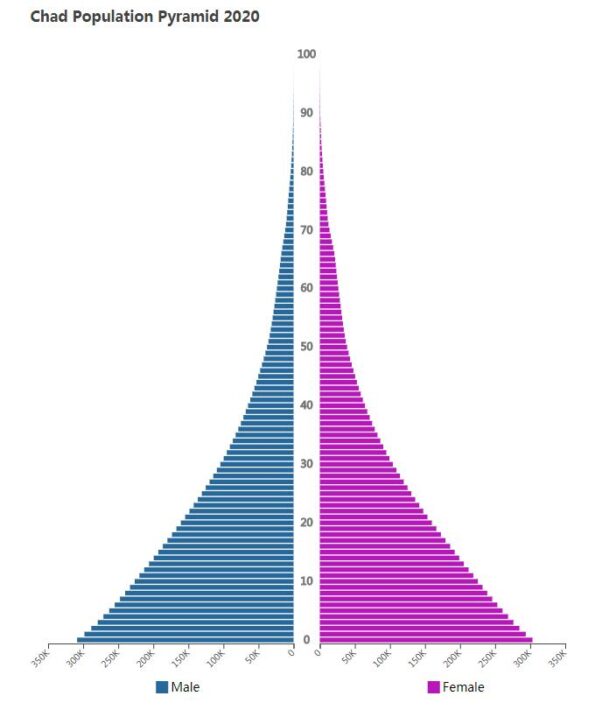 Sufism (Islamic mysticism) is widespread; most Muslims belong to the Sufi Brotherhood of Tidjania. Between five and ten percent of Muslims belong to more hardline Islamist groups. It happens that such groups are prohibited from operating and imams are imprisoned.

Dozens of dead in suicide in the southwest

About 30 people are killed and around 80 injured when three suicide bombers trigger their explosive charges on an island in Lake Chad.

An emergency permit is introduced at Lake Chad

The government faces a state of emergency in the Lake Chad region, where Boko Haram has carried out a series of acts of violence. The local authorities are given increased powers to limit freedom of movement and conduct the house search. At the same time, the government allocates the equivalent of EUR 4.5 million in regional development aid to the violence-affected region.

The trial of Habré resumed

The trial of Chad’s President Habré resumes in Senegal’s capital Dakar. The former dictator initially refuses to attend, but is carried into the courtroom by masked security guards. Habré should also have refused to talk to his new defense lawyers (see July 2015).

Ten suspected members of Boko Haram are executed since they were found guilty of participating in two suicide attacks in N’Djamena, which together claimed some 40 lives (see June 2015 and July 2015).

The army states for media that at least 100 members of Boko Haram have been killed on various islands in Lake Chad.

The anti-terror laws are tightened

Parliament adopts a new anti-terror law that, among other things, reintroduces the death penalty, just six months after its abolition; The penalty for less serious acts of terrorism is increased from a maximum of 20 years in prison to life. The police are given the authority to detain suspects for up to 30 days instead of, as for now, for two days.

The trial of Habré begins

In Senegal, the trial begins against Chad’s exiled President Habré, who does not recognize the legitimacy of the court but is forced to appear. As Habré’s defense attorneys are absent, the judge appoints three new attorneys and adjusts the trial in September to give the new defenders time to get into the case.

Fifteen people are killed in a suicide attack in a marketplace in Chad’s capital N’Djamena.

The parliamentary elections are postponed

The parliamentary and local elections that would have been held in June were postponed indefinitely. The reason is lack of money. The mandate of the sitting MPs is extended until further notice.

Many dead in fear of Boko Haram

Eleven people are killed in connection with a police raid on suspected members of Boko Haram in N’Djamena. Among the dead are five suspected Islamists, five police officers and one person who provided information to the police.

Over 30 people are killed and more than 100 injured in suicide attacks outside two police buildings in N’Djamena. The government accuses Boko Haram of being behind the attack and responds by bombing the terrorist camps in Nigeria. The government bans all-out Muslim attire, as Boko Haram’s suicide bombers repeatedly hid their explosive charges under veils.

Chad and Nigeria, Niger, Cameroon and Benin agree to form a joint military force to fight the Islamist terror group Boko Haram, which originated in Nigeria but is increasingly moving across borders. Nigeria will lead the force, which however will get its base in N’Djamena.

Seven former senior security chiefs, who served under President Habré, are sentenced to life imprisonment. Three other close employees of Habré receive 20 years in prison. These are the first judgments against the Habré regime to be announced in Chad.

At least five people have been killed when Nigerian Islamist terrorist movement Boko Haram attacks a village on Lake Chad. This is the first time Boko Haram has entered Chadian territory. The movement threatens to start a war against Chad.

Soldiers are sent to Cameroon and Nigeria

Parliament voted unanimously to send soldiers to Cameroon and Nigeria to assist in the fight against the Islamist terrorist movement Boko Haram. No information on the number of soldiers is made public, but Cameroon’s president says he expects “a great strength”.