Almost all Comoros are Muslims, a large majority of whom belong to Islam’s main Sunni. The country also has a small minority of Christians, mainly Catholics, as well as a few hundred Baha’is.

In referendums both in 2009 and 2018, voters gave their support for Sunni Islam to be state religion. Earlier, Islam’s role was described as a “constant inspiration for the principles and rules governing the Union”.

Freedom of religion is formally prevalent, but there are many examples of Christianity, in particular, being discriminated against because of its faith. Only foreign citizens are reported to be allowed to visit the few churches.

In recent years, more radical forms of Islam have gained followers, while raising the tone of the Shiite minority. President Azali Assoumani is believed to have tried to approach Saudi Arabia in recent years, partly as a way to counter the influence of former President Ahmed Abdallah Mohamed Sambi, who was close to Iran. 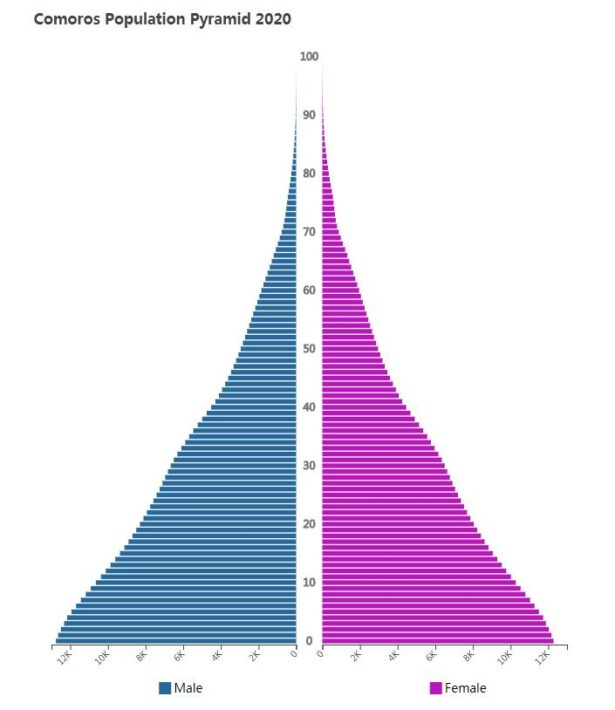 Islam characterizes everyday life, but living rules are not followed as strictly as for example on the Arabian Peninsula. Most women wear the traditional chirumani garment, a colorful cotton garment.

The Comorian military claims to have killed three armed men near a military base in Moroni. According to some sources, even a policeman must have been killed. At the same time, soldiers who have been imprisoned accused of being involved in a coup attempt 2018 must have escaped and tried to persuade other soldiers to join a riot against the current regime. Fayssoil Abdoussalam, who is appointed as the leader of the group, will be among the victims. At about the same time, the opposition presented a plan for how to get the president deposed. A group of twelve members is formed for it, called the National Transitional Council, led by Soilihi Mohamed, a widely respected former colonel, who calls for a civil disobedience campaign.Soilihi Mohamed and eight other opposition politicians are arrested. The transitional council is supported by the twelve candidates who voted against Azali Assoumani in the presidential election earlier in March. A local newspaper, La Gazette, closes after reporting on the transitional council.

Azali Assoumani wins the presidential election with almost 61 percent of the vote. The victory margin is so large that no second round of voting is required. Following a constitutional reform last year, it became possible for the incumbent president to stand for re-election (see July 2018). The election’s second Ahamada Mahamoudou receives just under 15 percent of the vote. The opposition claims that extensive irregularities have occurred in the polling stations, including no independent election supervisors, several ballots must have been filled even before voting began and some of the polling stations have opened prematurely. Opposition politicians equate this with a “coup d’état” and urge voters to “resist”. The government denies that there is anything in the allegations. Observers from the African Union , among others(AU) and the regional cooperation organization Comesa, however, refuse the choice because of irregularities and lack of transparency. The turnout is just under 54 percent. The day after the election, the police put tear gas on opposition supporters who protest in Moroni against how the election was conducted. Twelve people are injured in connection with this.

Attempt to attack the president?

Tensions in the Comoros are strong ahead of the March 24 presidential election. President Azali Assoumani has survived an attempted raid on the island of Anjouan. It claims his campaign manager, but the opposition claims that the task “is not credible”. According to the campaign manager, explosives have been placed on a hilltop to trigger a landslide against the car column in which the president is traveling. But the car must have been able to stop in time and no one was injured.

Thirteen candidates have been cleared by the Supreme Court to stand in the presidential election on March 24. All candidates except President Azali Assoumani stand for independence. However, the Supreme Court decides that the president’s main rivals, former Vice President Mohamed Ali Soilih and Juwa Party’s Ibrahim Mohamed Soulé, who are seen as his main counter-candidates, must not stand. Soilih says that in his case, the court has justified his decision that he owns a company worth several billion, something he himself denies. In the case of Soulé, the request to stand must have been rejected because it was signed by the second party in the party hierarchy, and not party leader Ahmed al-Barwane who is imprisoned.

20 candidates want to stand in the presidential election

Twenty candidates, including the incumbent president, have registered to take part in the March 24 presidential election. All but five candidates stand for independence. In order to participate, the candidates must be approved by the Supreme Court. The opposition is weakened by the fact that 10 politicians have been arrested following the referendum on the new constitution.